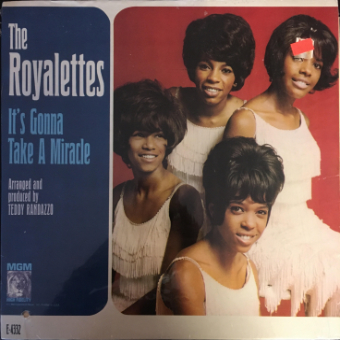 It's Gonna Take A Miracle by Royalettes

One of the great groups from the sixties. Maybe they didn't quite get the success as some peers did, but that doesn't diminish the awesomeness of this record. Includes the title track as well as, You Bring Me Down, Poor Boy, Don't You Cry, He's Gone, and more. Extensive liner notes by King Paul "Fat Daddy" Johnson, the "High Priest of Soul" from WITH in Baltimore!

A little on the condition. Appears to be an original release on the MGM label E/SE 4332. It's still in the shrink wrap, though it has been played, but the jacket and the album are in near pristine condition. The record we have is pictured and does have a small punch hole in the bottom left corner.