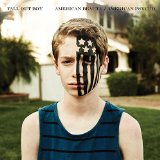 2015 release by Fall Out Boy. This is a sealed reissue of the album. This pop rock classic includes Centuries, The Kids Aren't Alright, Immortals, Uma Thurman, and others. To promote the record Fall Out Boy performed on TV shows such as The Ellen Show, Today Show, The Voice, People's Choice, and The Tonight Show. It's one of their bigger hit records and debuted at Number One on the Billboard Top 200 charts. As most know, Pete Wentz is from the north Chicago suburb of Wilmette.