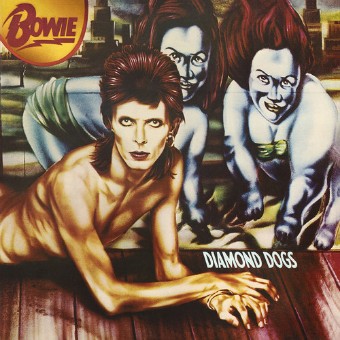 Fantastic reissue/remaster of David Bowie's 1974 release Diamond Dogs. Includes Future Legend, We Are the Dead, Rebel Rebel, Big Brother, 1984, and others. The theme of the record was an amalgam of Orwell's 1984 and Bowie's own glam life merged in an apocalyptic world. It was ranked No. 447 in NME's ranking of the Top 500 Albums of all time. The cover art was done by Guy Peellart which was Bowie as a hybrid human and dog. Original copies had genitalia on the hybrid portion of the dog but subsequent copies were airbrushed out. These pressings of those original copies are highly sought after and rare! The reissue does not include the original cover art. Sometimes remasters and reissues go back to the original artwork if there was a change at some point.