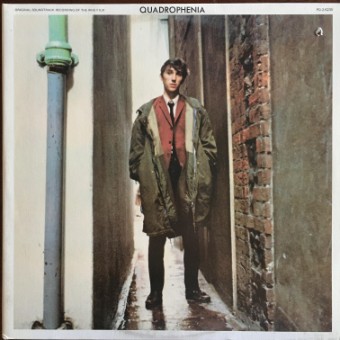 Quadrophenia Soundtrack by The Who and Various Artists

Outstanding companion album to the "Quadrophenia" film, which (Fun Fact) has Sting in it as an actor. The two-record set had three sides of "Quadrophenia" songs with slight variations from the The Who's "Quadrophenia" album. They are subtle, but noticeable and pretty cool. Also included are early Who songs when they are known as the High Numbers. Side Four is a collection of great rock tunes that includes James Brown, The Kingsmen, Booker T & the MGs, The Ronettes, Chifons, and the Crystals. It's a great soundtrack, tbh.
Note: "Buy Now" and get it shipped to your door. You'll be redirected to PayPal, a modest shipping charge (usually $4.98 for single LPs) will be added. We ship next day.
Pick-Up Option: If you'd like to pick up this record (and possibly others) at the shop, we can arrange a "non-shipping" payment, plus sales tax. Send an email or DM via the socials and we can set-up payment and appointment.