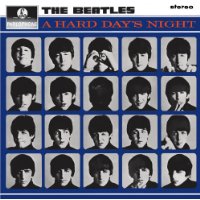 A Hard Day's Night by The Beatles

The third release from The Beatles. Beatlemania was a force that was not to be denied. The film, "A Hard Day's Night" was released to much acclaim and the Beatles acquited themselves as very fine actors. Oh, then there are the songs on AHDN. Some of their best early work and then there's Lennon's Gibson guitar work on this, especially on "I'll Be Back". The only Beatles release to be exclusively Lennon and McCartney compositions. No cover songs, no Harrison-penned songs.This is the reissue from 2012 and is the UK pressing with the songs in sequence as the Beatles intended them to be, as opposed to the US version of AHDN released on United Artists label.