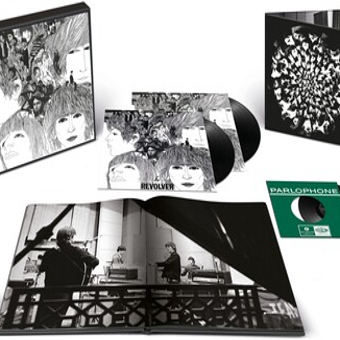 Revolver (Box Set) by The Beatles

A very elaborate box set to celebrate the making of The Beatles landmark 1966 release, "Revolver". Fabulous packaging, this set includes Giles Martin (George Martin's son) remastered LPs of both the stereo and mono mixes. Also includes a double album of demos, outtakes, and rehearsal that really give you a "fly on the wall" listen of The Beatles process. The single "Paperback Writer" and "Rain" was not on "Revolver" but a 45rpm single is included here in both stereo and mono. These recent box sets highlighting Beatles records have included 100+ page books and "Revolver" is no exception. This book includes dozens of rare photos, a forward by Paul McCartney, notes from Kevin Howlett and Giles Martin, details on the cover art by Klauss Voorman, as well as detailed liner notes on each song. A steep price, yes, but if you're a Beatles fan or know a Beatles fan, this is a must-have. Plus, when the other *vinyl* box sets have sold out, typically they are gone and out of print.