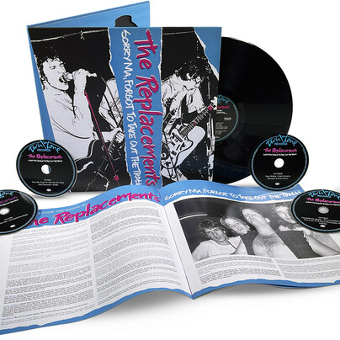 Sorry Ma, Forgot to Take Out the Trash Boxset by The Replacements

This is the fourth project we’ve done in as many years as part of a much-needed dig into The Replacements archives. Let me say this: we’ve been lucky enough to enjoy a lot of creative, commercial and critical success with this series, of which I am extremely proud of... but I am truly busting with pride over what we’ve put together for the "Sorry Ma..." package.

100 tracks, 67 unreleased. Among them some true lost treasures including the very FIRST recordings the band ever made (technically as The Impediments) and the earliest ever songs written by Paul Westerberg. Add to that their famed audition session for Twin/Tone (again never prev. released in full), newly discovered basement recordings, a selection of Paul’s home demos (goose bumps!), a mind-blowing and perspective shifting selection of studio recordings (alt takes, outtakes, various mixes), plus an entire pro-recorded live concert from Jan. of 1981, plus – and this key – a newly mastered version of the original LP that is an absolute sonic REVELATION.

Add to that a 24-page booklet with dozens of never-before-seen photos, an oral history of the "Sorry Ma..." era, featuring new interviews including contributions from Chris Mars (!!!), and other essays and remembrances.

In total, it’s a package that basically throws you into The Replacements world for the first 18 months of their existence, from the moment that dropout janitor heard that neighborhood band blasting Yes covers at 90mph, through to the release of a classic slab of American rock 'n' roll that launched a legend.